The First Graduating Class of Miramonte 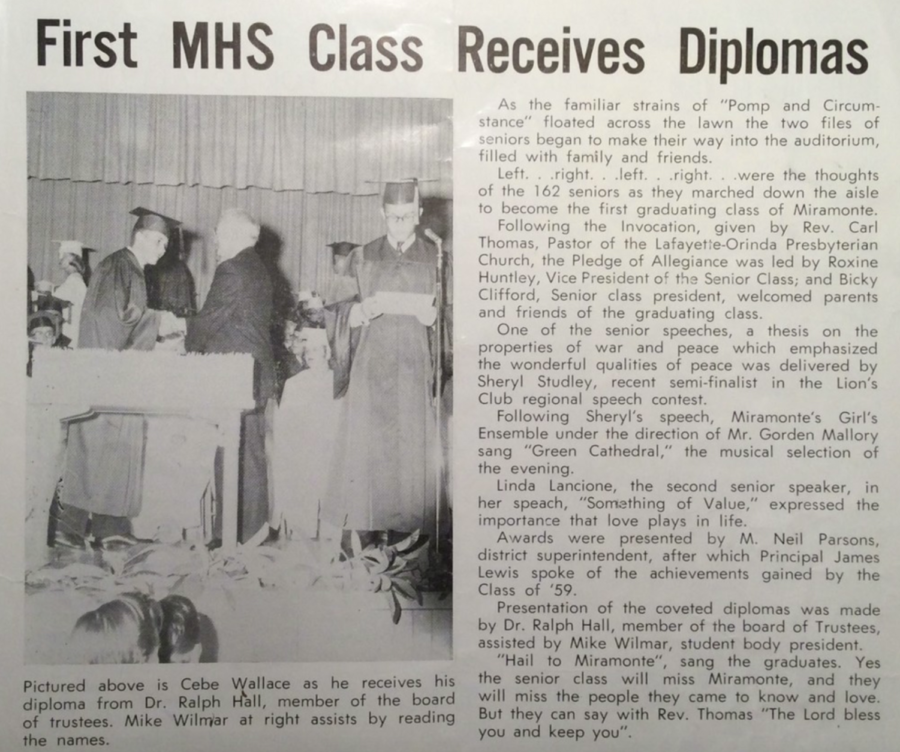 The class of 2021 is the first class to graduate from Miramonte after spending an entire senior year on Zoom. But the award for the most unique senior year goes not to us, but to the class of 1959, the first class ever to graduate from Miramonte High School. From playing sports without a proper field to drag racing down Moraga Way, this pioneer class paved the way for generations of students to roam the salmon-colored halls.

Miramonte opened its doors in 1955, drawing students from both Orinda and Moraga until Campolindo High School was founded in 1962. Orinda Intermediate School did not exist. Many of the students attended Glorietta Elementary through the sixth grade and then completed seventh and eighth grades at the Orinda Union School. Before Miramonte was built, all area students attended Acalanes High School, founded in 1940.

The class of ‘59 started as freshmen, and were the only class on campus their first year, with subsequent classes joining them each year. ‘59 and ‘60 bonded during those first two years at Miramonte and often felt like one big class. In fact, the classes continue to hold joint high school reunions. But being in the first classes was far from easy. “We were the ones that had to decide everything and figure out what to do,” Nancy Peterson ‘60 said. Students attended school against the backdrop of construction as additional classrooms were added, and sports teams practiced without a field or the benefit of older students with more experience. “We were breaking trail,” Bruce Hilger ‘59 said. “For instance, when I played football, we played against other teams and we got beat because they had been playing football for a number of years with the varsity groups and had the experience of more advanced training and more advanced skills and we just didn’t have that.”

With no classes ahead of them, the members of the class of ‘59 were essentially seniors every year. When it came time to pick the school colors, they advocated for black and pink, which the staff quickly overruled in favor of green and white. As for the school mascot, the administration also got the final say. “We didn’t think that ‘matadors’ was really very strong, but that’s what we got,” Carol Allen ‘59 said.

Academics at Miramonte were intense, even in its early years. “There was that kind of pressure that we needed to succeed so Miramonte would have an academic name for itself,” Kathleen Sudborough ‘59 said. “I’m sure they would have wanted to have a sports name for themselves, but our sports teams were pretty pathetic.” In fact, Miramonte’s football team lost every game their first year. “I went out with a receiver who weighed less than me,” joked Susan Hansen. Bruce Hilger scored Miramonte’s first-ever touchdown against Piedmont High School. “I remember running down the field, and they really kinda felt sorry for us because we were a pitiful team and I think they just let me run to the end of the end zone,” Hilger said.

While Miramonte may not have been a powerhouse on the field, the hard work of students in the classroom certainly paid off, with many going on to obtain college degrees. “I think we kind of felt a responsibility in a way because we were leading the way. We had to set the tone of the model because there was no one above us to guide us,” Irene Smith ‘59 said. But the school day was filled with fun as well. At the time, Miramonte was entirely surrounded by pear orchards. Barbara Stross ‘59 rode her horse, Fadiyah, to school, tying her up in the orchards and visiting her during lunch break.

But some things haven’t changed. “We had the senior lawn, a little patch of green grass and that was it,” Bill McGuire ‘60 said. “Nobody but seniors were supposed to go on it.” He was amused to learn that this year, with the lunch period divided for social distancing, the sophomores got to sit on the senior lawn two years early. Though cigarettes have been replaced with vape pens, the bathrooms at Miramonte reeked, even back in 1959. Students would smoke cigarettes in the bathroom and hope that Ms. Giddings, the “dean of women,” wouldn’t catch them. Like now, kids worked after-school jobs at local establishments. Bill McGuire worked at the gas station next to Casa Orinda, while Susan Hansen worked at the Orinda Theater for a dollar an hour.

Miramonte even had a foreign exchange program. Tore Lindholm ‘59 from Norway spent the 1958 to 1959 school year at Miramonte. Though he wasn’t expecting much from the American school system, he soon discovered that the math and physics courses he had signed up for were quite rigorous, and dropped them to take choir and public speaking instead. He did, however, take Ms. Clapper’s English course, and credits her as being the best teacher he ever had. His American mom taught him how to drive, and after returning home to Norway, he continued to visit her until she was over 100 years old. He dated a Miramonte girl, and they went to jazz clubs in San Francisco and often visited Fisherman’s Wharf. They stayed in touch and visited Miramonte together ten years ago. “If you ask me what it is that I didn’t like,” Lindholm said, “I didn’t like pom-pom girls. I felt that pom-pom girls was a very stupid thing, and then I didn’t like peanut butter. Everything else was great actually.”

Of course, the early classes also got into a lot of mischief. For their senior prank, the class of ‘59 cut down the flagpole. The students also dumped a truckload of sand in Ms. Giddings’ front yard. One escapade even made the front page of the Oakland Tribune. “There was a whole group of them that blew up the dam at St. Mary’s College,” Carol Allen recalled. “People would throw cherry bombs into the garbage cans on campus,” Susan Hansen said. Worse yet, some of these explosives would get dropped in the toilets.

A friend of Barbara Stross created a collection of Miramonte keys. “He would borrow a key and then put the key in a bar of soap to get the impression and then he would make the key so he had keys to the entire school, all the master keys.” After talking to Irene Smith, it’s clear that those keys would still be valuable today. “When I came back for our 20th reunion, I walked around the campus and I went and found my old locker,” Smith said. “I went and put in the combination, and it actually worked, 20 years later.”

Some aspects of life in 1959 bear no resemblance to today’s world. For instance, multiple alumni gave accounts of Sadie Hawkins Day, an event based on a comic strip, where the girls would ask the boys to a dance and dress up in backcountry costumes. Kathleen Sudborough won the costume contest one year. “I had a burlap sack that I wore. . . . I had long hair, so I braided it and put wire in it so my braids would stick out. And I wore my dad’s old garden clunker shoes. They were like hiking boots that were four sizes too big for me.” Miramonte students also attended dances called “sock hops,” sort of like this year’s Senior Ball—no shoes allowed!

In those days, Miramonte had a strict dress code. “Thoughts of wearing pants to school didn’t even cross our minds. Girls wore skirts with lots of starched petticoats underneath to make them stand out.  We had to wash and starch those petticoats often to make them do their job,” Kathleen Sudborough said. Bruce Hilger and his friends once rode their bikes to school, only to be sent home by the infamous Ms. Giddings for wearing shorts.

Even school safety drills were different. Rather than the “active shooter” drills the class ‘21 experienced, ‘59 had “civil defense” drills in case the Soviet Union bombed the nearby radiation lab at UC Berkeley. “When the drill happened, we would all parade out and the mothers would be where the circle was,” Kathleen Sudborough said. “We would just all load up in the car[s] [and] drive round the circle.” Trying to out-drive radiation sounds about as effective as throwing textbooks at an armed intruder, so apparently Miramonte’s safety drills haven’t changed too drastically.

One of the most shocking things about 1950s Miramonte is that it had gangs. “There were three gangs, if you will, that existed at Miramonte when I was there,” Bill McGuire said. “One of them was a group called the Knights, and they had leather jackets and they were the real bad guys of the campus and they would rumble with people from Concord or from Lafayette.” Among the girls, social groups were organized around service clubs. “I belonged to the girls’ group Ailanthus. It was kind of a service organization, but basically they were cliques,” Susan Hansen said. Both the Knights and Ailanthus were modeled after sororities and fraternities. Members of the Knights drag raced down Moraga Way, though as Bill McGuire noted, “I think all of them went on to higher education and became very, very successful people. In any other culture the worst, meanest people would go on to criminal enterprises.”

Bill McGuire says his time at Miramonte prepared him for the rest of his life. “They generated an expectation of success. . . .  I never thought as I was going through life that whatever I wanted to do, I couldn’t do.” Irene Smith agreed: “I feel very fortunate to have been raised in Orinda and attended Miramonte . . .  [Y]our class is very lucky because I think that so many Orindans, when they graduate, go on to excel in life.”

One member of the class of ‘59 who did not particularly enjoy high school was William Van Voorhis, who described himself as “a dweeb.” For less scholarly students, Miramonte’s academic culture could prove difficult. “There was nothing for guys like me who were just floating through. I took three years of mechanical drawing, to give you some idea of how little there was in the way of alternatives to college prep.” But Van Voorhis eventually found his way. After high school, he went into the military service, where, he laughs, “they put me into intelligence.” As it turns out, Van Voorhis had a great capacity for abstract thought, like seeing patterns. “Nothing that you would find in regular school,” he says, but “people like that are good at breaking codes. . .  And I found my place. I found where I belonged.” Van Voorhis wants the class of 2021 to know that everyone will find their place. “There must be idiots like me who run around high school for as long as it took to get out of there . . .  They’ll love knowing that I made it.”

As Kathleen Sudborough puts it, “High school isn’t your whole life, thank goodness . . .  There’s a big world out there, many possibilities to look forward to!” Carol Allen adds that life is unpredictable: “You start out with your life expectations and life goes ‘Yeah? We’re going to take a detour here’ . . . . Embrace life, take some risks; you’ll learn from them for sure.”

Van Voorhis agrees. “Everything from now on is going to be much more important than what brought you to this point. If you learn to accept what happens to you and look for the opportunities that are ahead of you, what you lose won’t be anything but preparation for what you are about to receive. If you’re mourning the loss, then you aren’t looking for the gain.”