Today, October 20th,  Miramonte will be participating in the statewide Great Shakeout Drill. Administration will sound the alarm at the beginning of third period and students will evacuate to the field. Once on the field, students will follow the normal protocol and get into lines behind their third-period teachers and remain calm until dismissed.

Almost exactly 27 years ago, on October 17, 1989, Northern California was hit with a major earthquake. Nicknamed “Loma Prieta,” or dark hill, it struck at a magnitude of 6.9 on the Richter Scale and devastated the Bay Area. A piece of the top row of the Bay Bridge fell down, and over a mile of Interstate 880 in West Oakland collapsed. In total, 63 people were killed and 3,757 were injured.

Besides the occasional jostle, Miramonte students have never experienced a shake as powerful as Loma Prieta. Over the past decade, Northern California has not faced any earthquakes with a magnitude greater than 6.0.

To make this drill as realistic as possible, a few students will imitate fake injuries. Students from the Sports Medicine class and teachers part of the search and rescue team will go to every classroom looking for the neon orange magnetic strip that signifies an injured person. In addition to the search and rescue team, there will also be field coordinators, who follow the students to the field to take roll. “The important thing in an emergency is that we can account for where everyone is,” said Associate Principal Jan Carlson, who is coordinating the Great Shakeout Drill.

Carlson has noticed in previous years that it is hard for students to take these drills seriously. Students are seen playing “duck duck goose” or passing balls around. “I know sometimes it’s hard for students to see the value in something like this, but the more often we practice, the more likely that it would be our automatic response if there truly was an emergency. It can become a little more automatic if and when that event hopefully never occurs,” said Carlson.

In the event of an actual earthquake, no one knows how any given building will hold up. As for Miramonte, “It was made in the 1950s, so the structure is old. However, since then it’s been retrofitted. All buildings have to pass certain codes, so it is safe. I’ve been told that by engineers that come in here,” said Geology and Chemistry teacher Ms. Leboy.

Stationed in every classroom is an orange Home Depot bucket filled with necessary emergency supplies. In each bucket are four 13-gallon bags, one 42-gallon bag, one roll of toilet paper, one toilet seat, one first aid kit, two granola bars, and an emergency supply of water.

Part of being a citizen of California comes the responsibility of earthquake awareness. According to the USGS, there is a 62% of a major earthquake striking, so it is important for students to know what to do in the case of an emergency. 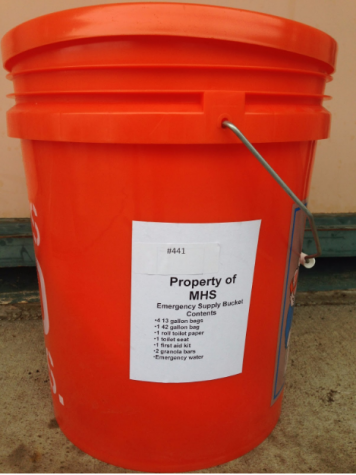