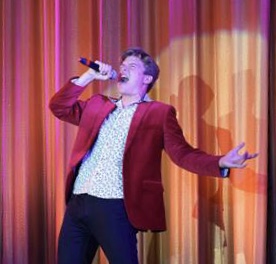 Year fourteen of Lamorinda Idol took place Sunday, Aug. 18 from 11 a.m. to 7 p.m. at the Orinda Theater. Kids from kindergarten to twelfth grade in the Lamorinda area could participate in solo or group acts.

“At first I wanted to do Lamorinda Idol because my sister has done it since kindergarten, and it always looked like a super fun event to be apart of. Especially as of late, I’ve been coming back to the program because of not only the fun of performing, but the great people I’ve met who give up hours to not only work on songs to perform, but also make the show happen in the first place, and all that behind the scenes type action,” junior Alex Meckes said.

Finalists and runners up from Lamorinda Idol have the opportunity to participate in other performances, such as the Lafayette Art and Wine Festival, Orinda Community Park, Lafayette Plaza, and Orinda Theater Square.

“I grew up watching Lamorinda Idol finals, and I was inspired to audition when I was in elementary school. I didn’t make it my first year, but the second year I auditioned as a solo and have been a finalist ever since! It isn’t just a great performance opportunity, though. My first official job was working for Lamorinda Idol, and I’ve made some of my closest friendships throughout the years that I’ve been performing with the program. It really is such a unique and wonderful experience in Lamorinda,” junior Nejla Ackdoe-Pagey said.

Lamorinda Idol has been bringing people in the community together for fourteen years and will continue to in the future.