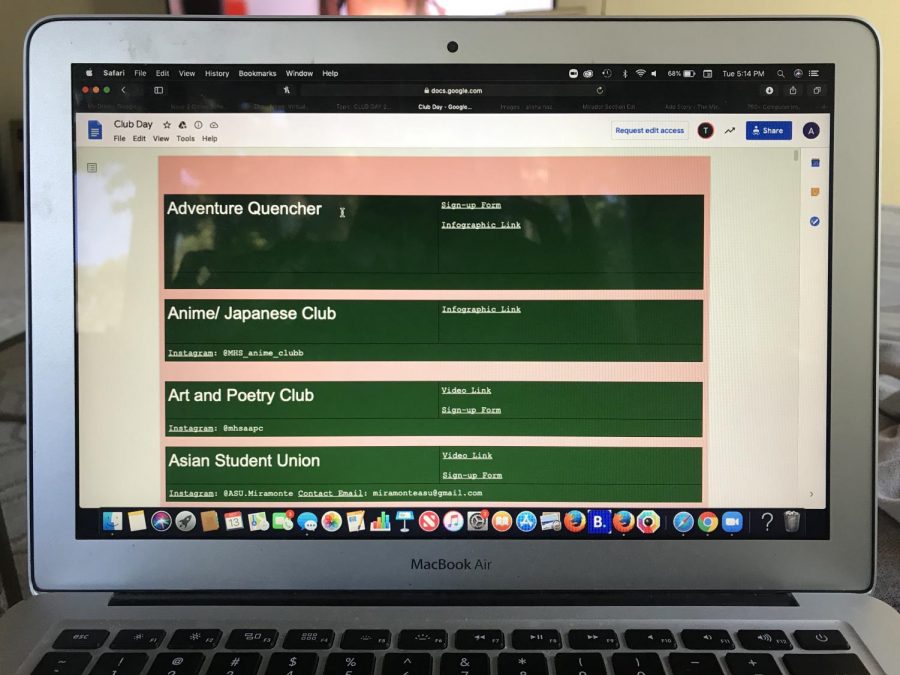 Oct. 5 Miramonte Leadership hosted their annual Club Day virtually with over 60 different clubs to choose from. Instead of the typical Club Day at the quad with posters and treats, students can watch videos from club leaders online.

Despite the whole virtual aspect this year, clubs allow students to connect and find shared interests. “This is a great opportunity to get involved and, hopefully, gather with peers with common interests in the near future,” Julie Parks, Principal of Miramonte High School said.

With Club Day being online, there were struggles figuring everything out. Typically, club leaders would set up their booths during lunch with minimal preparation required while this year, they created either a video or infographic about their club. “I had to spend some time creating a club infographic and editing our club video,” Cara Holden, president of the Latin Club said. Club commissioners had more responsibilities this year for making sure everything goes smoothly and that everyone has access to the clubs. “We felt a little rushed on time because we were coming up with the plan as we went. It was hard to communicate with all of the clubs because there are so many people and things to remember,” senior Michaela Lim, head club commissioner said.

The integrity of the clubs and their meetings stay intact except this year, clubs will be using Zoom which may pose event restrictions. “We’re probably going to see fewer events and fundraisers hosted by clubs simply because it’s going to take time for everyone to get adjusted to distance learning,” Lim said.  With so many students all in a Zoom call, it’s hard to hear everyone voice their ideas. “The main difference was that we didn’t get to individually talk to everyone that came to the Zoom,” Holden said.

As challenging as Club Day was, some students found it more convenient than last year. “I think I like Club Day a lot better this year because all the clubs are on one sheet[google document] instead of all over the place and it’s easier because I have more time deciding which club I want to do instead of just having one day to sign up for it[clubs],” sophomore Phoenix Dennis said. Students could continue to sign up for a variety of clubs even after Club Day.

The videos from clubs contain information about the club, meeting times, and sign-up information. With this new adjustment, clubs are adapting and figuring things out too. “We [the president and vice president] accidentally uploaded our blooper reel instead of our actual club video at first which was pretty funny,” sophomore Maya Martono, president of Miramonte Stem In Action said.