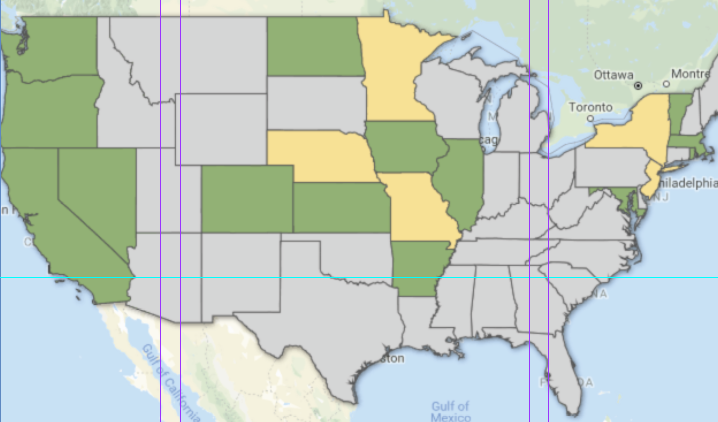 But why are the New Voices Laws so important for students who want to share their views on the world? New Voices Laws are state level statutes that protect the free speech of student journalists and protect them from censorship unless the material is considered an invasion of privacy, libelous, distracting, or dangerous to the school. This legislation also protects administrators from professional backlash for defending the student publications. Without these laws in place, school administrators have the right to censor content of school publications and any other type of expression on school campus, if they deem it inappropriate in any way. This precedent was set by the 1988 U.S. Supreme Court case Hazelwood v. Kuhlmeier when the court ruled in favor of a principal that pulled two controversial stories from a school newspaper. The court concluded that the students’ First Amendment rights of freedom of speech were not violated because “the paper was sponsored by the school and, as such, the school had a legitimate interest in preventing the publication of articles that it deemed inappropriate and that might appear to have the imprimatur of the school,” according to US Courts. While this logic makes sense in theory, it effectively prohibits students from sharing their opinions about anything that could potentially cause uproar in the community. This national stifling of young voices is what sparked the flame for the New Voices movement.

“New Voices is a project of the Student Press Law Center, a nonprofit advocate for the rights of student journalists. Our hope is that this bill will restore the Tinker standard of student expression in America’s high schools. That standard protects student speech unless it is libelous, an invasion of privacy, or creates a ‘clear and present danger’ of a ‘material and substantial disruption’ of the school,” according to the New Voices website.

The protection of student voices is an integral part of the future of society. Many accurate and honest reporters are bred from high school journalism classes. The Mirador mission statement, “Placing truth, accuracy and objectivity first,” serves as an outline of how everything that is published is evaluated. Luckily, student voices in California have been protected since 1977, making it one of the first states to pass New Voices legislation. Under the California Student Free Expression Law students attending public and charter schools are protected from administrative censorship allowing students to express their views on any issue, as long as it is not libelous, obscene, slanderous, or dangerous. According to the Student Press Law Center and California Education Code Section 48907, endorsing illegal activity on campus, or causing disruption of the orderly operation of the school, is subject to censorship.

Miramonte Principal Julie Parks is a proponent of allowing student voices to be heard. “I think it’s critically important that all of us have the right of freedom of expression. Students can be a vulnerable class because they are under the direction of the administration or institution that they attend and I think extra protections to ensure that there’s not repercussions for students who exercise their First Amendment rights are really important,” Parks said.

While California students have enjoyed freedom of expression at school since 1977, states such as Minnesota, Nebraska, Missouri, New Jersey, and New York are currently fighting for New Voices legislation, and 30 others have no protection against administrative censorship at all. The main purpose of publications on high school campuses across the United States is to get people talking about important issues and events in the community, and incite change when necessary. If students are only allowed to talk about matters that have been filtered by school authorities, then nothing will ever change, and the monotonous trend of similar opinions and viewpoints will persist well into the future.

Students in California, especially at Miramonte, are lucky to have many platforms to express their voices. Even if someone is not involved with Leadership or The Mirador, they can find a way to talk about what they deem as important, without the looming fear of administrative interference. Additionally, the student body can expect protection from harassment by their peers about their ideas, because the administration can take their side without fear of losing their jobs. It is important to take advantage of the rights students have by raising discussion and not being afraid of change.