Cheerleaders Show off Their School Spirit 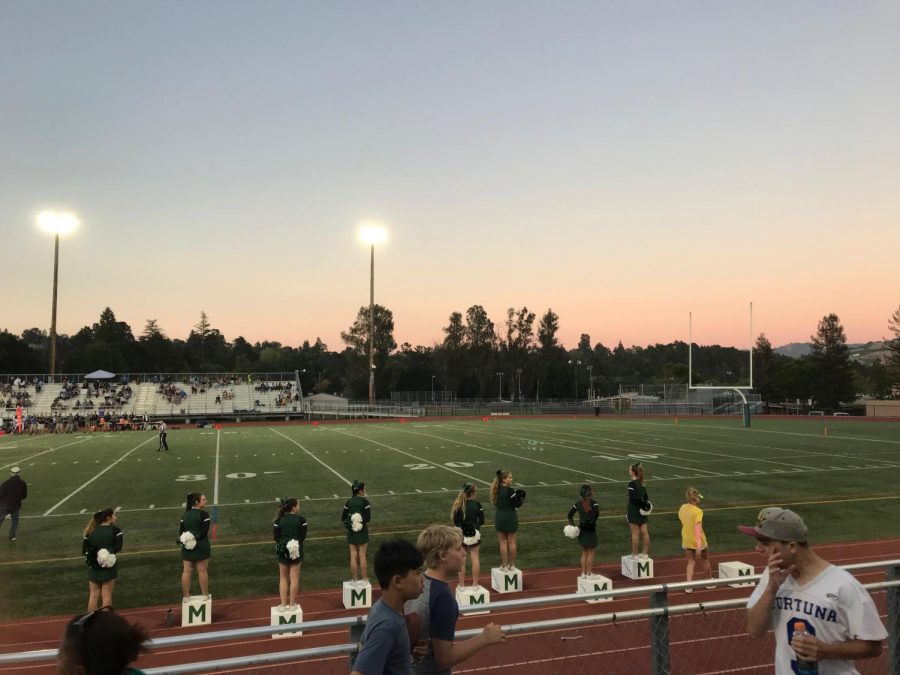 Miramonte cheer teams kicked into action as early as July 25. Summer training gets the cheerleaders back into routine and teaches them choreography for events at the beginning of the school year such as early season football games and Homecoming. “We did summer workouts and basic training to get ready for the season, but as we got into the school year, we’ve been doing some more practices and intense workouts,” varsity cheerleader Mia Trani 21’ said. Both Varsity and Junior Varsity practice together which allows for the newer girls to see more experienced cheerleaders. JV consists of 22 people while Varsity only 10 girls. Miramonte has had a total of four football games this season with a record of three wins and one loss to DeAnza High School.

Being a cheerleader is a commitment. Cheerleaders, on both JV and varsity, practice two days a week and have a workout session with a trainer another day, adding up to a total of three days of practice. Football games are almost every week, sometimes more. This sport also grants many qualities such as leadership and teamwork that high school students can benefit from. “I joined cheer because I love to dance and want to be spirited for my school. So far, it’s been the best choice I’ve made all year because I met so many amazing older high schoolers who helped me out so much,” junior varsity cheerleader Sophia Luo 23’ said.

The cheer team has cheered at the first four football games this season. The cheerleading team supports the football team and promotes school spirit at games with their most popular and frequently used cheer called, “Who’s Got the Beat?” “This season I’m looking forward to creating new routines each week, and also performing for the crowd. It’s nice to have a fresh routine every week which I believe is enjoyable for both the team and the crowd,” Trani 21’ said.

“Our game against Stellar Preparatory High School was the most fun to cheer at because the score was super close the whole time and we got to perform a half time routine. Miramonte won this game and we got some encouragement from our football team! It was very enjoyable to hear them cheering for us,” varsity cheerleader, Julia Jungbluth 21’ said.

“As one of the last remaining seniors, I play a large role in planning stunts for routines… My favorite part about cheer is definitely the sense of family I feel when I get to practice. The cheer girls are some of the kindest, funniest, and overall most amazing individuals I’ve ever met and I’m so thankful to have had the opportunity to laugh, cry, and perform alongside them for the past four years. I’ll miss them tons,” varsity cheerleader Shelby Tse 20’ said.